The price consolidation in the current area has continued throughout the passing week, and as expected it did make a Weekly HH, the price has reached the target of the bullish signal given here last week, as well as reaching the middle range of the upper Megaphone pattern, as usually happens after breaking a Megaphone pattern to either side.

In terms of price action, the passing week was an important week for the markets, much beyond the Weekly consolidation as per the S&P futures. The reason is that the locomotive of the last two bullish markets (2003-2007, 2009-?) which is the Nasdaq100 has finally reached the top of year 2000, the level of 4884 for the emini Nasdaq futures. It is highly important, because if you want to know where a train is going, you must analyze the move of its locomotive. A turn in the market should mostly start with a turn of the locomotive, and the last wagons (S&P? /DOW?) are usually the last to turn.

From the macro point of view we are in an area in which the behavior of the Nasdaq (being the locomotive) might give good indications as for the next behavior of the rest of the stock markets. But this should be put in the correct scale (at least the Quarterly timeframe, and very good chances to have a new all time high next Quarter).

From the micro point of view, the market has reached the most important target around, so there might be “no hurry” to continue the current thrust up till the next Quarter. Indeed, we will review the Nasdaq as well next week at the end of the current Quarter. Closing the Quarterly bar below the 4884 level (a clear sign of weakness) or above it (a clear sign of strength) mean a lot in terms of price action, as for the future macro moves to come.

Nasdaq100 Futures, Quarterly chart. Notice that for the Nasdaq the last two bullish markets where in fact one big bullish market (at the courtesy of prorealtime.com)

Back to the S&P, we are currently in a LH LL Monthly bar which is about to close in the coming week. In order to be bullish, the coming week must hold the price on the current level and above so that the whole Monthly bar turns into a bullish pinbar.

On the other side, as stated in the previous reviews, the fact that both last three Monthly bars haven’t reached the upper Bollinger band, not to mention penetrating it – is a clear sign of weakness. Closing the coming week weaker means that the Quarterly bar will have a considerable upper wick, hence very likely to be followed by a deep penetration down into its body in the next Quarterly bar (starting at October).

Notice the Daily open gap above (2172.75-2177.50). We already mentioned that closing this gap is a clear sign of strength. Otherwise, any penetration that is followed by sign of weakness as a Daily bearish pinbar with a wick that doesn’t close the gap entirely, is an important signal, and going short below its Low is a good spot to join the expected correction down.

However, that may not be so clear and easy. Notice that the bullish bar of last Thursday (when the Nasdaq has reached the all time high) has grabbed a bite of a point out of this gap and ended bullishly above the Daily 50 SMA, followed by a bearish bar that eventually couldn’t take it’s Low. Also the last Weekly bar closed above the Weekly 8 EMA short term sentiment line, both ar signs of strength.

Combining the above, it should be surprising to have a short range weekly bar in the coming week, at least for most of it , that may be overbalanced only by next Thursday/Friday. 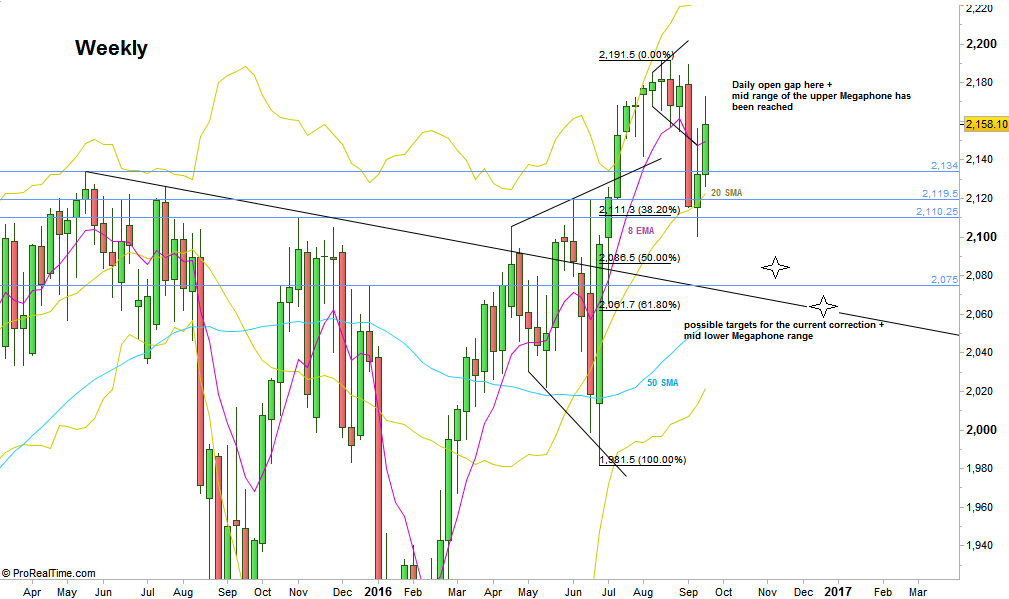 S&P Futures, Weekly chart (at the courtesy of prorealtime.com)