Another narrow range week has was over, in which the market started by a Weekly false break up, ending with a Weekly false break down.
So, we had a HH LL Week that closed near its High, a 3rd week to penetrate the upper Bollinger band, and composed of Daily bars that closed above the Daily 8 EMA short term sentiment line. The bottom line: Bullish, for the short term at least.
Pay attention though that the Monthly bar which was an impressive bullish bar that broke up the two year range we’ve been through, has closed without reaching out the Monthly upper Bollinger band. This is a clear sign of weakness, and points out that the market is ready for midterm correction on the Monthly perhaps on the Quarterly scales.
Breaking up the Weekly high is a bullish signal to reach the 2189 level, the target of the AB=CD pattern mentioned in the last reviews, and maybe slightly higher, even the 161.8% extension of the Brexit reaction at 2204. Reaching out the target will make the August bar touching the upper Monthly Bollinger band, but if followed by signs of weakness can easily turn out to be a short term bullish target from which a Monthly (even Quarterly) correction may start, as pointed out above. 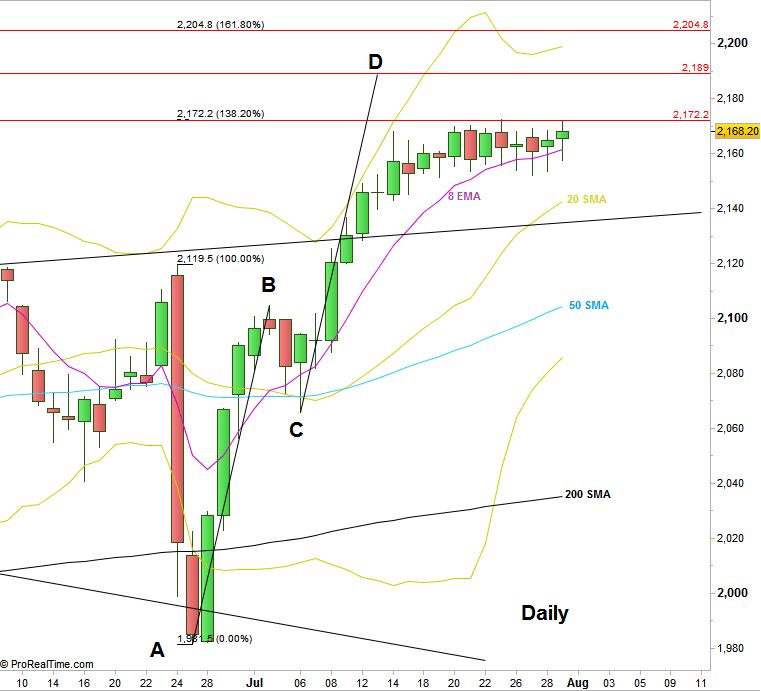