In the passing week, the Market has changed the picture by 180 degrees, and eventually the break down turned out to be a false break. What usually comes with it, is a major change of behavior. Instead of a sideways action, slowly crawling down trend, the reversal was fast and instantaneous (what makes it very hard to get in).

The important game changer was unquestionably the Tuesday’s bar. From a thrust down at the beginning of the day that continued the signs of weakness made at Monday, to see the prices reverse sharply and advancing to take the Monday’s high, means that those signs of weakness were faked. Add to this the fact that prior to this, the most important Low of the last midterm wave –the Low at 2026, after being taken out, had been followed immediately by a thrust up the next day, and you have two signs contradicting the bearish sentiment revealed up till that time.

So first of all, Stop loss orders above Monday’s High should have been activated (just because the thrust down that took place first – turned out to be false), and the covering of the shorts were a key contributor for this rally up. The surprise accompanies this kind of behavior causes the market to move sharply without testing back, i.e. a behavior that doesn’t let you take advantage of proportional pullbacks in order to join the move, as there aren’t any. In other words, why should the market give you gifts when the situation suddenly becomes very clear (in this case, upward) ?

In Hindsight everything looks very simple, and I can tell you from my experience that hindsight trading is the most profitable business there is … (kidding).

The real game is to catch the signs before the big move is done. Here, from the Price Action inner point of view, it wasn’t that clear to get such a thrust up, but at least it definitely alarmed you to cover short positions instantaneously.

As for the coming week, in which the monthly bar is going to close, we should pay attention to the way the monthly bar is closing. Currently it is still a LH-LL (Lower High Lower Low) bar, and for short term bullishness if it stays LH LL monthly bar, we need a monthly close near or at the high, i.e. not to get a bearish move on the 1.5 trading days (Monday is a holiday) that we have till the end of this month. We need as well a confirmation thrust next month above the High of May.

The daily picture is very strong. The last three daily bars penetrated the upper Bollinger Band consecutively, so there is even a chance to take out the April Monthly High still within the bar of May.

There are very good chances to reach the High of November at 2110.25 which is the major Last High Before Low since the All time High, whether in the next days, or after staying in the current range (2022-2100) for a while. In this case, the High of July 2015 at 2126.25 might be also taken out within the same monthly momentum. The key question is whether the move is going to take out the All time high continuing rapidly towards the Monthly upper Bollinger band at 2150, or before taking out the All time high we face a major bearish move that should be treated (currently) as a correction, that might reach even the 1940 support level mentioned in the previous reviews. 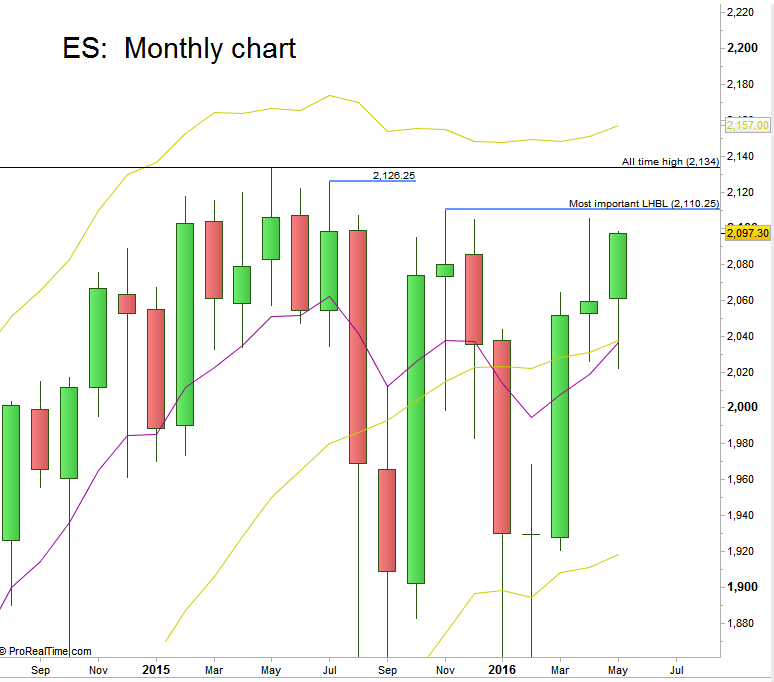 S&P Futures: Monthly chart (at the courtesy of prorealtime.com)